In April 2018, after 65 years of continuous operation as a community theater, Lakeshore Players Theatre began operating year round in the brand new Hanifl Performing Arts Center. Located in White Bear Lake, about 18 miles northeast of Minneapolis, the new facility includes a sound system managed by a Symetrix Prism 8×8 DSP.

“The Symetrix Prism 8×8 routes audio to most of the building except for the Kids & Family Theatre, which is separate,” explains Dan Cincoski of DT Cincoski Design, who designed and installed the system. “In the main theater, we have 10 Radio Design Labs (RDL Inc.) audio wall plates that provide inputs and outputs, converting analog to Dante and streaming it to the Prism. We have about 40 channels of audio that can be routed via Dante through either the Prism or the Midas M31IP house mixer in the auditorium. We put analog inputs in the lobby, two mic inputs and an aux input on a mini-jack. Those go to the Symetrix, as well, so they can do performances and presentations in the lobby.

Although most input is sent to the Prism via Dante, the processor sends audio in the analog domain to the various speaker systems around the building. “We can send audio from the theater or the lobby to almost anywhere in the building except for the Kids & Family Theatre,” Cincoski relates. “We send audio to the front-of-house speakers in the theater, the Scene Shop, the Black Box, the Green Room, office areas, hallways, bathrooms, and so on.”

Symetrix ARC wall panels provide basic system control. “Using the matrixing in the Symetrix Prism, I have zones set up using an ARC-SW4 that route paging to zones around the building so they can hear the theater or the lobby audio and control the levels,” notes Cincoski. “For control, we have a Symetrix ARC-2e panel in the lobby that controls the local audio levels and an ARC-2e in the main theater control room that manages nine presets for the auditorium sound. The presetsinclude a presentation mode that doesn’t incorporate the Midas mixer, acoustic performance (just a mic to pick up sound, which is distributed to the building and listening assistance systems), practice modes, and incorporation of the lobby in the mix outputs. We also installed a Symetrix ARC-K1e wall control. It’s just basic control; that’s all they need.”

The Symetrix ARC-2e is a menu-driven remote control for Symetrix DSPs that provides 24 menus with 16 items each for control of basic function or more complex, logic-based events. It features 3 navigation buttons and an 8-character backlit display with 32 scrolling characters. The ARC-K1e provides a rotary controller with button, typically for volume control, while the ARC-SW4e features four switches that can be programmed as latched, momentary, or radio buttons for control of mute, source selection, and presets. All three models are single-gang, Decora-style faceplates.

Cincoski has been using Symetrix processors for the past four years but until now he was exclusively using Symetrix Jupiter 8×8 DSPs for stand-alone room installs. “The Jupiter 8×8 is inexpensive, it sounds good, and you don’t have to do a lot of programming,” he observes. In fact, my original design for the Lakeshore Players Theatre called for a Jupiter 8×8. But I realized that using a Symetrix Prism and a Dante network would make it possible to have more inputs and outputs, with easier wiring, and the flexibility of matrix mixing.”

This was the first time Cincoski used Dante, but he wasn’t fazed by the technology. “With the Prism, programming is relatively easy,” he insists. “I programmed
input gain, routing, equalization and other processing, speaker matching, and so on, and I was able to get it done fairly quickly.”

The Lakeshore Players Theatre system is in full use now, and the client is delighted. “The system sounds good, they have the flexibility and features they need, and we did it within the budget,” confirms Cincoski.” The Symetrix Prism and Dante enabled me to deliver a lot more functionality for the money than in the original plan. And the Prism has performed very reliably; we’ve had no problems.” 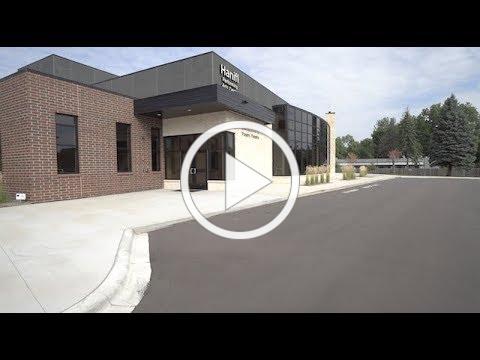 With unrelenting focus, Symetrix delivers high-performance audio DSP hardware and software backed by the highest caliber of customer care. Early-stage implementation of Dante™ network audio is just one of many ways Symetrix continues to lead with innovation in the commercial AV industry.